As mentioned in an e-mail posting yesterday, had a trip to Crewe to see Clan Line, which was due to run 2 test runs to Chester & return. I couldn’t get there to see it depart on the first run, but was ready for it on the return. Fortunately it stayed in the station long enough for me to cross to another platform for some photos on the sunny side. It would be about an hour & a half before it set off from the Heritage Centre on the second run and the light wouldn’t be too good, especially as clouds hid the sun, but I waited and the shots aren’t too bad. You have to suffer the cold & poor light when it’s a loco that’s rarely seen in this area!

One of the photos in the sun, as it was reversing to the Heritage Centre:- 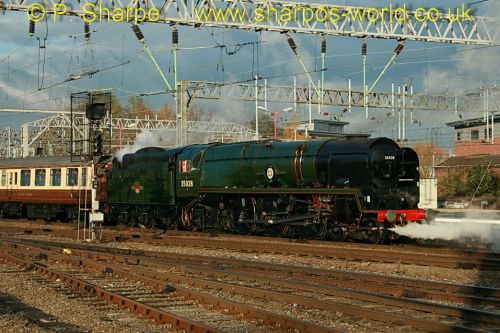