Oh well, more photos for me to sort………

On the Saturday, I didn’t have my camera, but went prepared on the Sunday. We saw it in the distance circling above Highley before heading south and over Arley. As yesterday, it was closely following the curvature of the railway, banking to the right above us then to the left as it crossed the river. The return was also impressive, as the photos show.

Following a fast moving ‘plane with a camera isn’t easy – on the southbound runpast I set the camera on manual focus, but not having my glasses couldn’t check results. Just in case, for the return I used auto focus, but all photos seemed acceptable.

One of the photos below:- 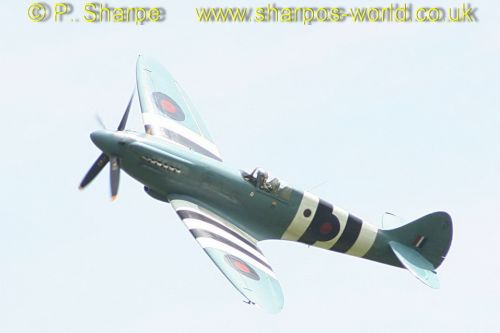 Got to Arley earlier than yesterday, so saw more trains. From down by the river, 7714 was seen heading south towards the station, a few minutes later 7802 was seen northbound. Then up at the station 42968 arrived first on a n/b train, then 7812 s/b. Next, the diner arrived behind 46443, which ran round before taking the train back to Kidderminster. Almost forgot, 4566 was seen entering Arley as we walked back to the car.

Due soon after 1.40 was a Spitfire. We saw it in the distance circling above Highley before heading south and over Arley. As yesterday, it was closely following the curvature of the railway, banking to the right above us then to the left as it crossed the river. On the n/b flight I managed more photos, one shown below:- 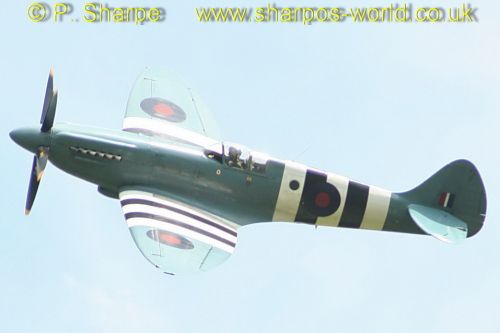 Brief visit to Arley. 7812 on a northbound train, crossing with 42968. Later on, 46443 arrived with the GW dining set, ran round then back towards Kidderminster.

It is a 40s weekend, and a Spitfire flew over. Another ‘plane scheduled for tomorrow, so I’ll take a camera. The forecast for today was heavy showers but we were back home well before the rain started, and only a few spots so far.

This was a real treat, the opportunity to see the same train 4 times at  a cost of just £1.90 – the train fare to Stourbridge & return! 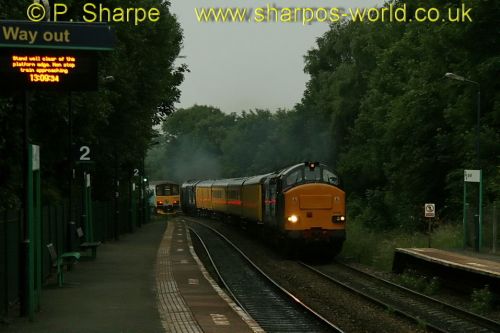 I was going to stand at the end of the platform where there was no shade from the trees – good job I didn’t, as the dmu would have blocked the view!

Just finished sorting the photos from earlier today. Shots at the Junction and Town stations.

One of the photos here:- 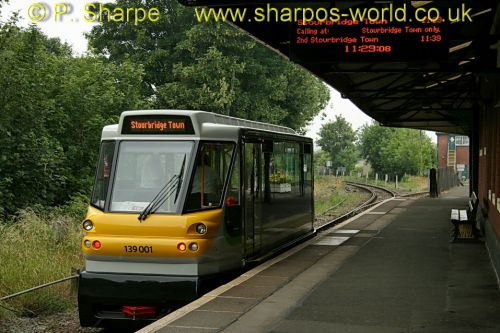 Couldn’t miss this working, through Old Hill to Hartlebury, then to Round Oak, back to Hartlebury then returning to Derby.

After walking KC, another walk to the station to see the train pass through. Then I went to Stourbridge to see the 37s two more times before returning to Old Hill. By this time, even though it was just after 1pm, it was so dark in the shade of the trees, and raining! Camera settings were iso800 and the photos need some “tweeking”!

With an hour or so spare as before the 37s returned, had a trip on 139001 down the branch to the Town station. The journey would be much smoother with welded rail, as the dips at some of the rail joints are quite noticeable. Apart from that, the journey was fine.

Hopefully I’ll upload some of them soon. They used to be on an old site of mine but that was removed a year or two ago

Can’t do any gardening at the moment, so decided to have a train ride.  The 1.00 off Kidder was hauled by 7812 on an 8-coach maroon set. We crossed 42968 at Bewdley on the GW set, then 4566 was waiting at Hampton Loade when my train arrived. Within minutes I was heading back towards Kidderminster.

May go on the SVR tomorrow

Only a few weeks before I’m eligible for my free pass, so handed in my application form today.

At last, getting something for “free”, although I have paid for it indirectly over many years.