Just a ride from Kidderminster to Arley & back. 80072 was our loco on the outward journey, which crossed with 5164 at Arley. After lunch, 2857 took us back to Kidderminster, where we stayed long enough to see the arrival of 34007 on the 4th set. 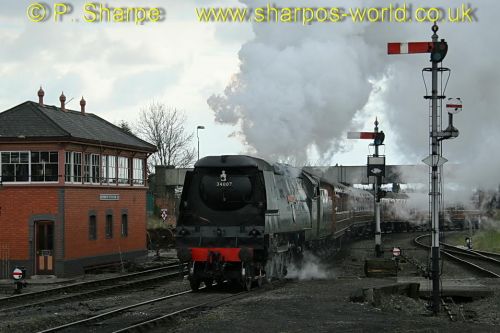 This tour started at Exeter, so was passing through at a reasonable time in the morning – and the sun was shining! Still some snow on the ground from last weekend though. You will see from the last photo how close we were to having the shots spoiled by a passing DMU.

3 minutes late at Stourbridge, but 3 minutes early passing Rowley – so a good climb up the bank! 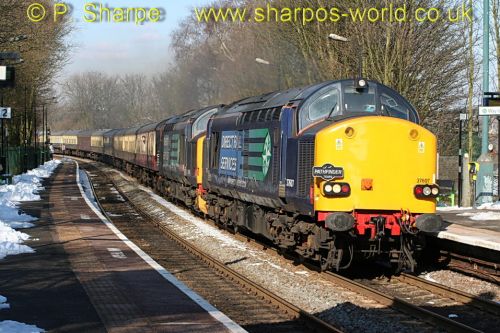 5043 was working “The Curry Train”, an evening loaded test run from Tyseley to Leicester, returning via Tamworth. So, one of my little outings to Small Heath was in order to see it just after leaving Tyseley.

The light was not too good, but I was pleased with the results 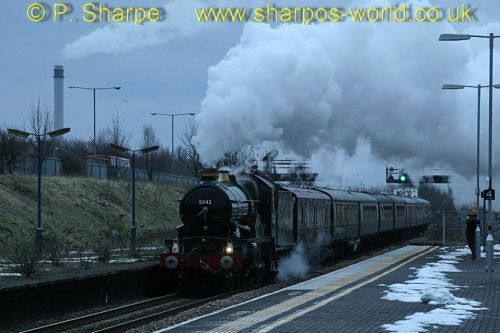 I had noticed this train was booked to run & it fitted in perfectly with my return from the Severn Valley Railway Spring Gala. I caught the DMU from Kidderminster & the freight was only a few minutes behind me, so once back at Cradley I only had a few minutes to wait to see it. In fact the level crossing gates were only raised for a matter of seconds before being lowered again for this train.

The last day of the Gala. I wanted a ride on the auto train & caught the local to Arley behind 65, and there was just time to get my sandwich & jam sponge before 1450 was due to depart. My plan was to change trains at Bewdley & head back to Arley to see 34007 arrive. 1501 was waiting at Bewdley & I was soon on the way back to Arley. Fortunately 34007 arrived before the northbound trains, so a good opportunity of some photos of it approaching the station. 2 trains were booked to cross it here, 34053 on the first with 10 coaches, then 4566 with the Diner. Having taken many photos over the previous 2 days, and feeling rather cold, I caught the train headed by 34007 and returned to Kidderminster. 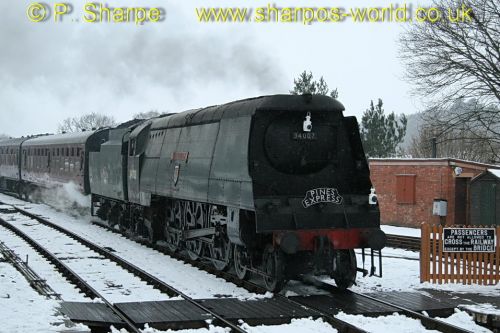 Another 75 photos from Saturday have been added since the last update. They were taken at Arley, then some more at Highley before returning to Kidderminster. 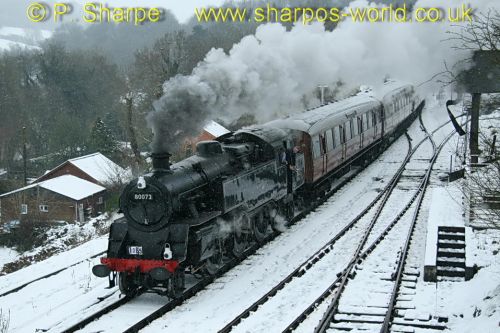 The 75 photos are on the same link as yesterday

The photos from today are very different to those from yesterday, due to several inches of snow having fallen. 34007 is also seen, apparently it was working yesterday afternoon after I had gone home – so I missed it. I haven’t time to finish the photos this evening, so more will be added tomorrow. 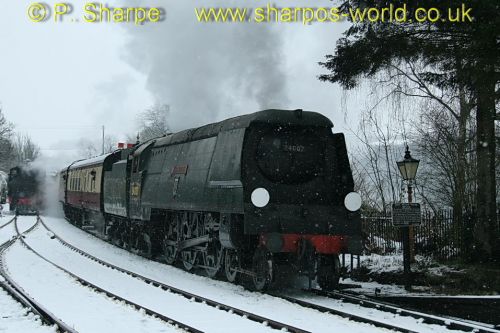 A shorter day than planned – I was home by 3pm. The weather was rather depressing, but the trains were enjoyable! I saw 3 of the visiting locos but 34007 apparently did not work a train until later in the day. 80072 took us to Highley, where we spent some time watching 65 & 1450, which were working the local trains. From there, 80072 took us to Arley for our sandwiches. Our final journey was with 34053 back to Kidderminster. 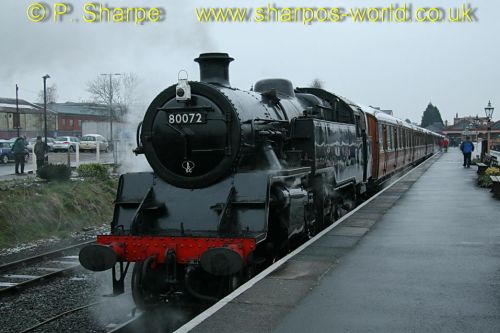 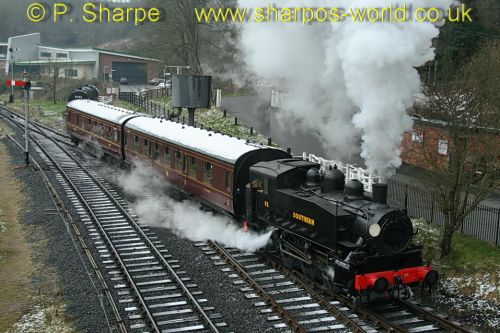 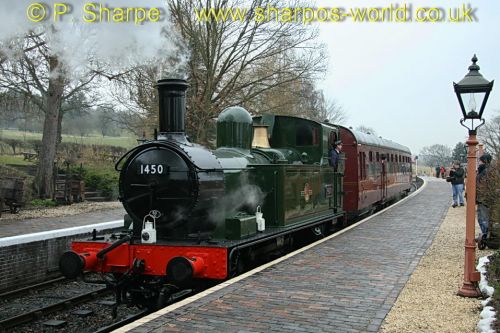 Dorridge is one of the easier places to get to from here, and seeing 31190 on a train seemed a good reason to head across there. Checking on the the other freights due through around the same time, 66167 was on 6M26 & 66562 on a late running 4M55. 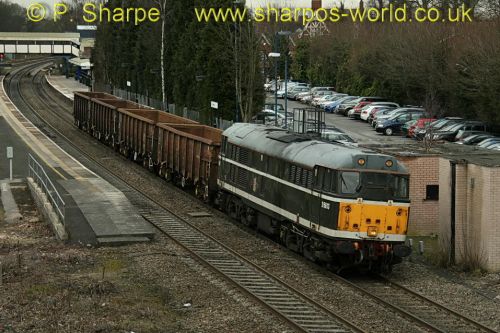 I didn’t see this trip advertised, but it was running from Carnforth to Oxford via Stourbridge. It was booked through my station at the same time as a stopper in the opposite direction – so I went to Stourbridge to see it. 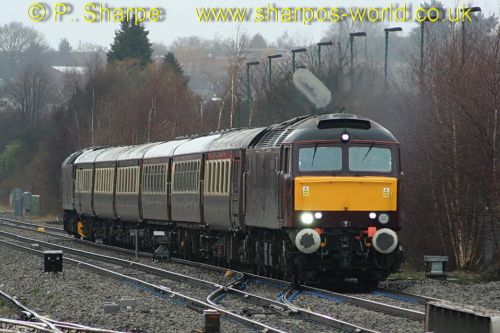 Only a few photos showing the 3 locos used over the 2 days. The bonus is seeing 1450, which had been unloaded at Kidderminster the previous day. 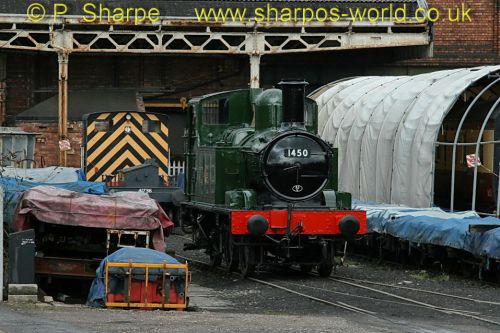 You have to make the most of anything that comes this way – as there isn’t much other tha DMUs. The Stoneblower was running from Honeybourne to Nuneaton. 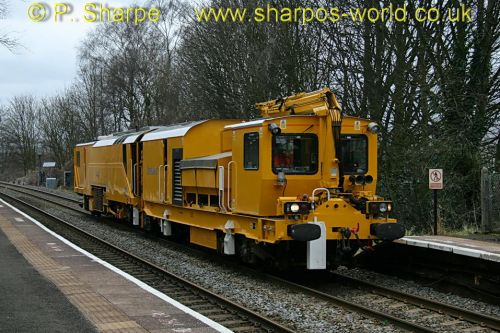 Unbelievable, one train northbound an hour, but on both occasions this coincided with the southbound train. 66088 was seen on the first day, and 66053 with 66172 on the second day. The workings were ballast from Bescot to Norton Junction.

I would have preferred to have been on the other platform, but no good with a DMU in the way 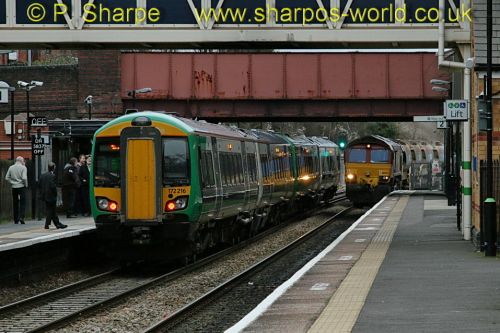