Less of a rush today, so KC had her walk by the river. 4566 was seen heading south near Arley with the Venturer set. Up at the station, 43106 s/b on Footplate Experience with 1 coach was first into the station, which meant 5764 working north was brought to a stand outside the station. Last two locos seen were 5164 on the Limited and 7812 on the train for Kidder.

Couldn’t resist this one, the chance to see the train at Small Heath, catch a local train into Birmingham and walk to Curzon Street to see it again. All I needed was the local train to run to time – and it did, I was there with just minutes to spare.

Steam locos are not allowed to enter New Street station, so this train was hauled from Tyseley by a diesel, with 6201 Princess Elizabeth at the rear but staying outside of the enclosed part of the station. When 6201 departed for London, it was the first steam loco from New Street for 40 years.

The first photos show 47773 hauling the train at Small Heath, with 6201 at the rear, from Tyseley to New Street. Then I wanted some photos which included part of Birmingham in the background, what could be better than the Rotunda and with the loco on the climb away from New Street! Quite a few photos but I have tried to vary them as much as possible.

It was a great sight:- 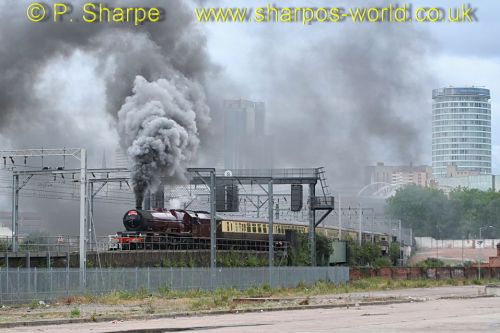