I just happened to be in the right place at the right time. I was in the grounds of the castle, looking over the wall at the station below, when I heard some ‘planes in the distance. 5 ‘planes were approaching very fast, not realising what they were, it took me several seconds to get the camera ready but I managed a couple of shots.

Thinking I wouldn’t see them again, it was good to see the vapour trails in the distance, then soon after more trails as they appeared to be “looping” in the distance.

A couple more distance shots & then soon after 9 ‘planes flew overhead & the shots came out quite well. 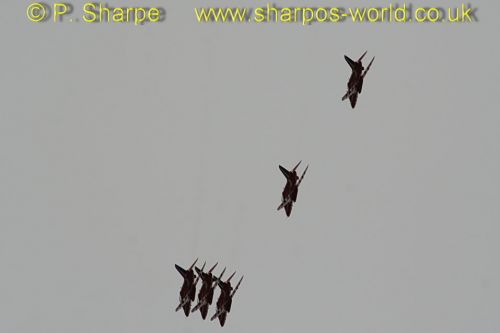 Apparently, there was an event at RAF Shawbury, see this report:-